For a while now, I've been looking for new places to explore the lower James River and its tributaries. When I start a search, I usually begin looking for public boat ramps or public beaches with something interesting nearby to explore. This time I came across a trip report from paddling.net about Claremont Beach in Surry County, and this is where I headed. Claremont is an interesting little town that is in an area long on history. The first English settlers stopped here before heading to Jamestown, but quickly realized other people already called the place home. On the edge of town is historic Claremont Manor, a pre-revolutionary plantation that once belonged to one of the wealthiest men in the state. The town itself was a planned community built in the late 1800's, and judging from some of the surviving buildings, it was once a nice place, but now appears ready to recede into the forest. Down the hill from Claremont is Claremont Beach, an area of  newer vacation homes right on the James River. In the middle of these homes is a small beachfront landing with room for about 15-20 cars, though I was the only one needing a space. Pulling in, I noticed a sign saying that only residents of Claremont can use the landing, but a friendly lady strolling by said I would be fine parking there. I launched from the sandy beach and followed the shoreline westward and upriver.

Once in the water there are many exposed pilings from old piers, but they are easy enough to maneuver around, but still use caution, as some lie just below the waterline. Once you get past the cluster of riverfront houses, the shoreline becomes more natural. The beaches here are littered with fossils laid down from 5 to 7 million years ago when this was once part of a shallow sea. In places you can paddle below cliffs where ancient shells are sloughing off in great layers. Most of the beaches are private, and I would not recommend getting out to explore, but in a kayak you can get pretty close, and if the water is clear you can reach right in and pull out all kinds of little treasures.

Further up the James, on its south side, is Upper Chippokes Creek, which at its mouth is fairly broad. I followed the east side of the creek until I reached a bald cypress filled cove, where I could paddle between the trees. Feeding the cove is a small creek called Brandon Gut, which I followed until it became too narrow. Since the tide was heading out, I did not want to get stuck in the mud. The bird life on this little creek (as well as on the larger waterways) was rich. I saw osprey, great blue herons, kingfishers, and I also saw many bald eagles, both adults and juveniles. This once threatened species has made a spectacular comeback along the James. After exploring the gut, I began my way back to the landing. Until this point it had been a serene, much-needed paddle, and I felt like I owned the water and had it all to myself, but as I neared Claremont Manor, the sound of repeated rifle fire ruined the zen atmosphere. From the pattern, I guessed it was target practice, or at least I hoped so, but I knew I did not want to be a target, so I quickened my pace past the plantation. As I paddled it, my round trip was about 6.5 miles. 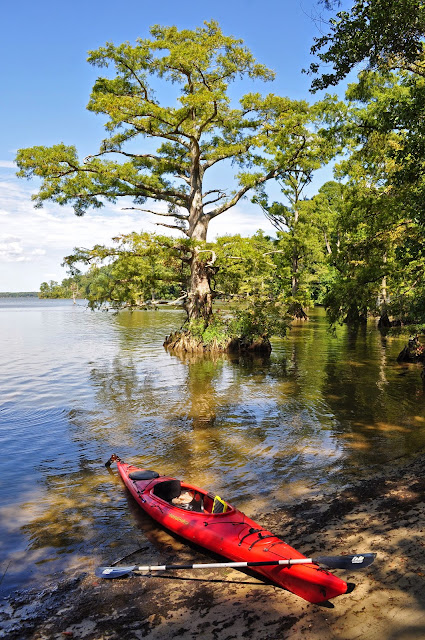